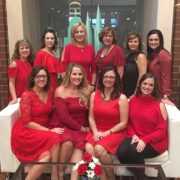 LINCOLN, November 20, 2017 ― This 2017 Lincoln Go Red for Women event was jam-packed with individuals and companies who donated their time and treasure to creating a world without heart disease and stroke. But two attendees’ devotion to the American Heart Association’s live-saving mission shined brighter than the rest – Jill Duis RN and Erin Starr RN.

The pair have donated years of their time to the Go Red for Women movement and took it upon themselves to host an inaugural Go Red event in Fairbury, Nebraska in 2013. Now in its fourth year and known as the Jefferson County Go Red for Women, the event has become one of the highest fundraising events, per capita, in the state of Nebraska. Duis is JCH&L’s diabetes educator and infection preventionist. Starr is JCH&L’s chief quality officer.

“Jill and Erin’s dedication to our mission and the Go Red for Women movement has made such a difference in Nebraska,” said Go Red for Women Specialist, Liz Zillig. “Heart disease is the No. 1 killer of women and is more deadly than all forms of cancer combined. An estimated 43 million women in the U.S. are affected by heart disease with one in three women dying from heart disease each year. Their work is helping us change these staggering statistics.”

For this dedication, the American Heart Association presented the duo with the “Heart of Gold” award at the Oct. 12 Lincoln Go Red for Women.  The entire Go Red for Women committee attended.

“We got the ball rolling, but the event would not have been the success it is without our team of dedicated staff members,” Duis said. “We also thank all of our area business sponsors who have so graciously support the event.”

The fourth annual Jefferson County Go Red for Women event is set for Saturday, February 17, 2018, at the Fairbury Elks Lodge. Tickets are now available by calling 402-587-0495.