Easiest access will be by parking in the H Street parking and entering through the JCHC Main Entrance. Follow the lobby signage to “Hospital.” The meeting rooms will be to the left. The Small Conference Room is the second door.

The Parkinson’s Support Group generally meets on the second Monday of each month.

The group is designed to provide an opportunity for area residents to share their experiences with Parkinson’s disease. There is no cost for participants.

The name change mirrors the organization’s newly expanded approach to healthcare in our local communities. As the industry’s core focus shifts from treating illness and injury to nurturing and sustaining overall health, leaders at Jefferson Community Health & Life are responding by aligning care delivery more closely with community-based health and life services.

“Of course, we are still the community hospital people know and trust for quality care during times of illness or injury,” said Chad Jurgens, chief executive officer. “Our new commitment is an extension of that mission – one that expands our reach beyond our hospital walls and into our community, enabling a deeper impact on the lives of those we serve.”

Through the seamless delivery of health and life care, Jurgens said, Jefferson Community Health & Life is committed to keeping people and families healthy over time, which goes far beyond treating them when they are sick.

“Through a combination of small steps and big leaps, we are embracing a Commitment to Health designed to keep quality healthcare exactly where it belongs: close to home,” said Jurgens.

Jefferson Community Health Center is open to serve your emergency and inpatient needs today. We encourage any non-emergency appointments be rescheduled.

The Fairbury Clinic will be closed. Patients are encouraged to call to reschedule today’s appointments.

JCHC’s Radiology department encourages those with non-emergency radiology procedures to call and reschedule.

JCHC’s Rehab and Sports Clinic will not be offering outpatient services today.

Anyone with non-emergency appointments today at the health center are encouraged to reschedule.

The Bob and Wauneta Wellness Center will be closed.

FAIRBURY – A free Diabetes Update will offer education and information about diabetes on Tuesday, Jan. 24. The program will be held from 9:45 a.m. to noon in the Conference Room at Jefferson Community Health Center.

JCHC’s diabetes education team offers Diabetes Updates periodically to help anyone living with diabetes learn to live a healthier life. The update promises to be interactive, hands-on, and fun – and packed with information and education.

The Diabetes Update is open to anyone who has diabetes or is interested in diabetes.

FAIRBURY – The Jefferson Community Health Center Board of Directors held the organization’s annual membership meeting for fiscal 2016 on Monday, Jan. 9.

Two new board members were elected: Trevor Steinmeyer of Fairbury, who works at Ol’ Red 99.5, and Sheri Schultis of Diller, who works at ESU 5. Steinmeyer was elected to fill the position which had been held by Dick Hoppe for eight years. Board members may serve up to two consecutive four-year terms. Schultis will finish the unexpired term of Carmen Hinman, who had served two years and resigned because of other responsibilities. Steinmeyer and Schultis were elected unanimously by the corporation members at the annual meeting.

Hoppe, 2016 board chairman, thanked the administration, staff, board members, and physicians for their work to make the year successful. Hoppe, is going off the board after serving two full terms and six years as president told the board, physicians, administration and staff to “Keep up the good work.”

Hoppe said a major project for the year was the purchase of the Fairbury Clinic. He said administration and the board of directors continue to look for opportunities to address the healthcare needs in our community.

Chad Jurgens, chief executive officer, had sent a report of the year’s activities to all members of the corporation. Anyone who has donated $100 to Jefferson Community Health Center is a member of the private not-for-profit corporation.

Jurgens also highlighted the purchase of the Fairbury Clinic as a major strategic initiative achieved in 2016. He said this opens up opportunities for Jefferson Community Health Center which should make for an exciting 2017.

During 2016, JCHC earned the Star Level of the Nebraska Safety Council’s Workplace Safety awards, and Gardenside long-term care was again recognized with a 5-Star rating from the Centers for Medicare and Medicaid.

Chance Klasek, chief financial officer, said that while fiscal 2016 was the biggest year in JCHC’s history for revenue, expenses were also the highest ever. For the fiscal year, JCHC reported a 1 percent operating margin. He noted that hospital patient days increased in 2016 from patient days in 2015, and said it was the first year for an increase in hospital patient days since 2007.

At the regular board meeting which followed the annual meeting, officers were elected for 2017. Officers are: Brian Scheele, chairman; Mary Glenn, vice chairman; and Brian Blobaum, secretary-treasurer. 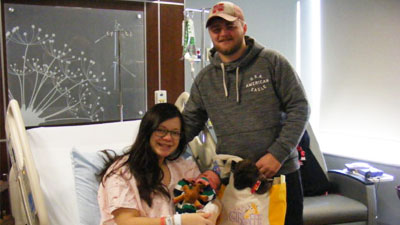 Great-grandparents are Richard Greenwood, Cheryl Greenwood and Lawrence and Joan Warnke, all of Fairbury; Carol Armstrong of Bellevue; Ronald and Barbara Wurtz of Morrowville, Kan.; and Leonard and Patricia Bartels of Washington, Kan.

Great-great-grandparents are Ethel Peters of Washington, Kan.; and Lois Muller of Fairbury.

JCHC and the Fairbury Journal-News partnered with a number of local businesses to present a gift bag to Beau as our New Year’s Baby for 2017.

Easiest access will be by parking in the H Street parking and entering through the JCHC Main Entrance. Follow the lobby signage to “Hospital.” The meeting rooms will be to the left. The Small Conference Room is the second door.

The Parkinson’s Support Group generally meets on the second Monday of each month.

The group is designed to provide an opportunity for area residents to share their experiences with Parkinson’s disease. There is no cost for participants.

FAIRBURY – The Alzheimer’s Caregivers Support Group will meet on Thursday, Jan. 26, at 6:30 p.m. in the JCHC Small Conference Room.

The program will be a DVD program, “Alzheimer’s Disease: Inside Looking Out.” In this DVD program, several people with early stage Alzheimer’s talk openly about the impact of the disease in their lives, about their feelings and how they are coping.

Easiest access is by parking in the H Street parking and entering through the JCHC Main Entrance. Follow the lobby signage to “Hospital.” The meeting rooms will be to the left. The Small Conference Room is the second door.

A support group is a gathering of people with common problems, needs and interests which allows them to share their feelings, thoughts and experiences in a combined effort to survive the shared problems. It may include family members, caregivers, friends and other individuals interested in sharing information and giving and receiving support.

Those who have been diagnosed with Alzheimer’s Disease themselves are also welcome to attend the meetings.

The support group is open to anyone interested in attending. There is no charge and no membership commitment. No pre-registration is necessary.

FAIRBURY – Join us for the January Health Today session on cholesterol. “Taking Control of Your Cholesterol” will be presented by JoAnne Lamb, owner of Empowering Lives NOW! Lamb is a certified personal trainer, health coach and wellness director.

The January session will be held on Tuesday, Jan. 17, in the Large Conference Room at Jefferson Community Health Center. The free educational program will be presented three times that day: 12:20 p.m., 2:30 p.m. and 5:30 p.m.

Health Today is a free monthly health education session offered by Jefferson Community Health Center. It is typically offered in one lunch-time session. Participants are encouraged to bring their lunch, or are welcome to purchase lunch in the JCHC cafeteria, which is located near the Conference Rooms.

JCHC works with a wide variety of professionals who will be bringing educational programs on health-related topics each month. Please note that the day of the week for the session may change because of presenter schedules.

Reservations are not required. The program is FREE. The only cost for participants would be their lunch, if they choose to purchase it. Participants are also welcome to carry in their lunch.