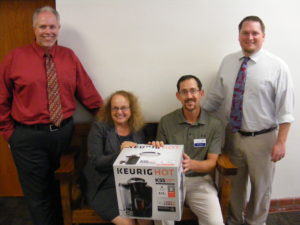 All Jefferson County businesses were invited to participate. The businesses with the highest percentage of employees taking a Diabetes Risk Assessment and signing up for My Wellness Dashboard were honored as the winners. Each won a Keurig for their breakroom.

The overall goal was to raise awareness about diabetes risk. The diabetes risk assessment continues to be available for the public at myhealthrisk.org.

“Most of all, anyone who takes the diabetes health risk assessment can learn important information regarding their risk of developing diabetes in the future,” said Lana Likens, JCH&L director of public relations. “We are pleased at the awareness raised among the participating businesses and thank the businesses for their interest in their employees’ health.”

Diabetes is ranked the 7th leading cause of death in the United States, and affects more than 100 million adults, according the Centers for Disease Control. Diabetes is recognized as an area of health risk for Jefferson County in the 2016 Jefferson Community Health Center Health Needs Assessment. (See details of the Community Health Needs Assessment at JCHealthandLife.org.)

For more information on the diabetes risk assessment, please contact Lana Likens at 402-729-6855.

It has been nearly a year since the Walk & Bike Fairbury Summit was held in October 2017. Our team has officially become JeffCo On the Move. We are working through a number of areas within the community to encourage and facilitate healthy lifestyles.

The City of Fairbury has been working on redevelopment plans for H Street and has nearly completed a plan which will include sidewalks from 14th to 27th Street.  We have completed an initial sidewalk assessment for priority pathways which connect the schools and parks.  The city is offering matching funds to assist property owners in upgrading or adding sidewalks, with emphasis on priority areas. Details and applications are available at the Fairbury City Offices, or learn more information by calling  402-729-5261 The city is also investigating an extension of the current trail to the east to connect with Nebraska Highway 15 south of Fairbury.

Jefferson Community Health & Life has launched a hashtag campaign: #jeffcohealthyforlife.  The goal is to have people snap pictures of themselves or others who are exercising or living healthy lifestyles and ultimately, encourage others to get out and life healthy lifestyles, as well. We want to create a culture of healthy lifestyles! JCH&L Burkley Fitness Center is planning for youth swims for the school year, and has added a martial arts class for all ages.

The Fairbury Public Library is looking into a “story walk,” which is a children’s story posted on signage along a walking route.  The library is also working on identifying historic sites around Fairbury’s priority walking routes, with the possibility of adding signage to encourage exploration of the city’s history while walking or biking.

Fairbury Public Schools held a Color Run for the September elementary fun night on the cross-country course, and are working toward a walking club for kids who arrive prior to school start time in the morning.  They are also working with Public Health Solutions on possibilities of utilizing a new program for Safe and Active Routes to School, or a “walking school bus” program.

Anyone interested in being part of the JeffCo On the Move team is invited to contact Judy McGee at 402-729-6887.  We need your ideas and participation to move forward and make Jefferson County a place where we encourage everyone to stay “on the move” to build a healthier community.

The program will be a video on Making Visits Valuable by Teepa Snow.

Easiest access will be by parking in the H Street parking and entering through the JCH&L Main Entrance. Follow the lobby signage to “Hospital.” The meeting rooms will be to the left. The Small Conference Room is the second door.

The Alzheimer’s Caregiver’s Support Group meets on the fourth Monday of each month at 6:30 p.m. at Jefferson Community Health & Life.  It is designed for those who are caregivers and family members of those who have Alzheimer’s Disease or other dementias.

The group is designed to provide an opportunity anyone interested to share their experiences with Alzheimer’s Disease. There is no cost, and no pre-registration.

The session will be held at 12:20 p.m. on Tuesday, Oct. 17, in the Large Conference Room at Jefferson Community Health & Life.

Health Today is a free monthly health education session offered by Jefferson Community Health & Life in a lunch-time session. Participants are encouraged to bring their lunch, or are welcome to purchase lunch in the JCHC cafeteria, which is located near the Conference Rooms.

JCH&L works with a wide variety of professionals who bring educational programs on health-related topics each month. Please note that the day of the week for the session will vary.

Reservations are not required. The program is FREE. The only cost for participants would be lunch, if they choose to purchase it. Participants are also welcome to carry in their lunch.

Jefferson Community Health & Life Encourages You to Bring Your Questions

The forum  will begin at 10 a.m. in the Large Conference Room at Jefferson Community Health & Life, 2200 H St., Fairbury.

This is a great opportunity to visit with the senator, find out what the legislature is expecting in the upcoming session, and share your thoughts and ideas.

The informal session is free and open to the public.

Easiest access will be by parking in the H Street parking and entering through the JCH&L Main Entrance. Follow the lobby signage to “Conference Room.” The meeting rooms will be to the left. The Small Conference Room is the second door.

The Parkinson’s Support Group generally meets on the second Monday of each month. The group is designed to provide an opportunity for area residents to share their experiences with Parkinson’s disease. There is no cost for participants.