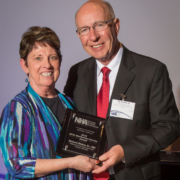 Dr. Blatny Sr. has been serving the community of Fairbury since 1973. He has been an active part of the medical community locally and statewide. In September he semi-retired, and has limited office hours and is taking emergency call through the end of the year

“Dr. Blatny Sr. is very deserving of the Meritorious Service Award recognizing longevity and breadth of service of an individual to health care in the state,” said Chad Jurgens, JCH&L CEO.

Dr. Blatny Sr. received his Doctor of Medicine degree in 1969 from the University of Nebraska College of Medicine in Omaha, completed his internship in 1970 at McKennan Hospital in Sioux Falls, South Dakota, and served as a flight surgeon in the United States Air Force from 1970 to 1973. In 1973 he began serving the community as a family physician and partner at the Fairbury Clinic PC. He is certified with the American Board of Family Medicine. In 2016, the Fairbury Clinic was purchased by Jefferson Community Health &

As an active part of the medical community – both locally and state wide, Dr. Blatny Sr. has been active in the Nebraska Medical Association. He served as president in 2014-2015.

The Meritorious Service award given by the Nebraska Hospital Association recognizes the long-term contributions of members to the Association and their individual hospitals. The award recognizes longevity and breadth of service of an individual,  not only to their facility, but to health care in the state.