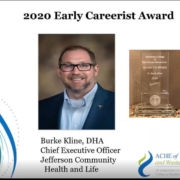 Dr. Burke Kline, JCH&L CEO, was honored on Friday as he was named the American College of Healthcare Executives Early Careerist during the ACHE annual convention, being held virtually this year.

Dr. Kline has more than 16 years of health care experience, beginning his healthcare career as a CNA and CMA during his high school years. He was raised in Hastings, Neb., and graduated from Hastings Senior High School.

After many years in Law enforcement, Dr. Kline decided to return to healthcare and returned to college, first obtaining his Bachelor of Science degree in Human Resource Management from Bellevue University. After earning his Bachelor’s degree, Dr. Kline began working for the Pawnee County Memorial Hospital in Pawnee City, Neb. Dr. Kline started out as Administrative Resident then was promoted to the executive assistant to the CEO, then to Associate Administrator.

During his four-year tenure at Greeley County Health Services, Dr. Kline earned his Doctorate in Health Care Administration and was asked to sit on many boards including the Kansas Clinical Improvement Collaborative, Kansas Hospital Association’s Governance Committee, Kansas Health Education and Research Foundation, and the Pioneer Health Network to name a few.

In 2020, Dr. Kline and his family decided to return to Nebraska and relocated to Fairbury, Neb., as the CEO of Jefferson Community Health and Life. JCH&L includes a 17-bed Critical Access Hospital, a 40-Bed long-term care, two family medicine clinics, and a community fitness center, and is co-owner with Bryan Health of a 50-unit assisted living facility. JCH&L is just embarking on an estimated $8.4 million project which will build a new family medicine clinic attached to the health center.