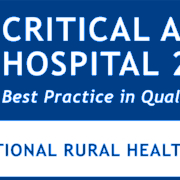 Jefferson Community Health & Life has been named one of the Top 20 Critical Access Hospitals (CAHs) for quality in the country.

Those hospitals that have been recognized as Top 20 Critical Access Hospital “best practice recipients” have achieved success one of two key areas of performance:

Quality index: A rating of hospital performance based on the percentile rank across the indicators of Hospital Compare Process of Care measures.

Patient perspective index: A rating of hospital performance aggregated and ranked across 10  domains of the Hospital Consumer Assessment of Healthcare Providers and Systems (HCAHPS).

They were selected from The Chartis Center for Rural Health’s 2020 Top 100 CAH list, which was released earlier this year.

“Jefferson Community Health & Life is proud of the efforts of its physicians and staff who have contributed to our hospital achieving this designation,” said Victor Lee, MHA, LFACHE.

“Our results as a top 20 hospital in quality means our community can count on us to deliver the services they need now and in the future.”

Jefferson Community Health & Life has a history of nationwide recognition as a critical access hospital. In February JCH&L was named a Top 100 Critical Access Hospital in the United States for the sixth time in seven years. JCH&L scored in the top 100 of critical access hospitals (CAHs) on the iVantage Strength INDEX™ in 2020, 2019, 2018, 2017, 2015 and 2014

In May 2018, JCH&L was recognized by The Chartis Center and the National Rural Health Association for being in the Top 20 Critical Access Hospitals in the nation for 2018.

In November 2019, JCH&L was recognized for the third consecutive year with the Performance Leadership Award for overall excellence in quality, outcomes and patient perspective. The Performance Leadership Award is given by the Chartis Center for Rural Health/iVantage Health Analytics and the National Organization of State Office of Rural Health (NOSORH).

“These recognitions reaffirm that our emphasis on quality, performance and satisfaction are making a difference to the people we serve and to our health center,” Lee said.

Changes Continue Because of COVID-19
Scroll to top