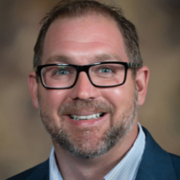 Jefferson Community Health & Life CEO Burke Kline, DHA, MHA, CHFP, FACHE, was awarded the America College of Healthcare Executives Service award at the annual meeting held in LaVista on Thursday, Oct. 20.
ACHE held its annual meeting during the Nebraska Hospital Association convention. ACHE is dedicated to advancing healthcare management excellence. The American College of Healthcare Executives Recognition Program was implemented in appreciation of the extensive volunteer involvement of members. It celebrates members’ commitment to the healthcare management profession. Recognition is bestowed at three levels, based on a range of volunteer activities that demonstrate leadership and contributions to furthering professional excellence.
Dr. Kline serves on the board of directors for the American College of Healthcare Executives Nebraska and Western Iowa Chapter. His three-year term began in January. He is a member of the membership committee of the Nebraska and Western Iowa Chapter, as well. He is also serving a three-year term on the Editorial Board for the national association. He has also served as co-chairman of the mentorship committee and has served as a mentor through ACHE’s program.