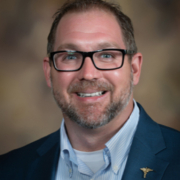 JCH&L CEO Burke Kline, DHA, CHFP, FACHE, has been elected to serve on the board of directors for the American College of Healthcare Executives Nebraska and Western Iowa Chapter.

ACHE is the preeminent professional society for leaders dedicated to advancing health. It gives members access to networking, education and career development at the local level. The Nebraska/Western Iowa Chapter has more than 300 members.

Dr. Kline’s 3-year term on the board will begin in January. He was elected at the ACHE Annual Meeting held in October.

He is also currently serving as one of 30 members on the ACHE National Editorial Board, which direction in the development of the ACHE website, ache.org and gives suggestions on enhancing the value of the website to members. Dr. Kline is also on the Nebraska and Western Iowa Chapter’s membership committee where he has helped create and design a new mentorship program for new and established members.

JCH&L Among Top 10 Nebraska Hospitals For Rural Provider Excellence in...
Scroll to top