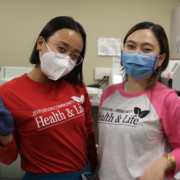 “It’s really like a dream,” Aiko said. “This is a great leap for us. It is our first time being independent.”

It has been a long process. About a year ago, Jefferson Community Health & Life and April and Aiko signed up for the H1B Visa program, which is a work visa for specialty occupations. At the time, the two young ladies didn’t know each other, but each was hoping to be approved to work as a Medical Technologist (MT) in a lab in the United States. Their H1B Visas were approved early this year, and they still had to have interviews and approval from their government to leave for the jobs which were waiting for them at JCH&L. They met when they had their official hearing, and kept in touch until it was time to travel. They learned a lot about each other during 36 hours of travel. They arrived in Grand Island on March 31, and JCH&L staff picked them up to come to Fairbury.

“We are so excited to have April and Aiko here and on our staff,” said Sandy Bauer, Human Resources director at JCH&L. “They fill an important need for Medical Technologists in our health center laboratory. We have been looking for additional laboratory staff for over a year.”

April and Aiko said that in The Phillipines lab techs are underappreciated. They became interested in Nebraska because each have friends in the state – some in Ainsworth and some in Henderson.

They have been in Nebraska less than a month – but they both said they love it here already. Both are from Cebu City, a very large city of 900,000 people.

Fairbury and southeast Nebraska are a definite change of scenery, and April described it as “very peaceful.”

They have started training in the laboratory at JCH&L, and are finding people they have met at work and in the community to be very helpful, friendly and welcoming. Another native of The Phillipines who works in the JCH&L nutrition services department planned a picnic to introduce them to the Filipino community in Fairbury. About 20 people enjoyed a picnic at Crystal Springs on April 3 featuring homecooked Filipino food, as well as some American favorites.

“The people here have been very helpful,” April said.

The biggest difference they note right away is weather. In The Phillipines, it feels like summer all year round. Neither has experienced cold weather – and both are looking forward to seeing snow next winter. But they have had to purchase coats.

They are looking forward to trying some American food – especially Runza. One thing they’ve learned about American food is that the serving sizes are much larger than they are used to. They find they can often share a meal. In The Phillipines a couple of staples are soup and rice. They agree that soup would be very good here with the colder temperatures.

Both are excited to learn to drive in the United States. April has driven in The Phillipines, while Aiko has not. They agree that driving seems much different here – with fewer vehicles, wider roads, and a little more relaxed atmosphere. They said the roadways in The Phillipines get “really crazy” and there is a lot of tailgating.

They were very excited to use the self-check out at Walmart. That is something that is not available to them in The Phillipines, they said, and it was a thrill to check out their own purchases.

They are adapting to the more informal system in this area of calling co-workers and others by first names. They are used to calling everyone “sir” or “ma’am” – and also use a lot of honorifics – calling co-workers and superiors by Miss, Mr., Auntie, etc. Calling their supervisor Cari at first “felt weird,” they said. But they are beginning to get used to it.

Coming from a nation surrounded by ocean and beaches, they said not seeing fresh seafood is different. They notice they see a lot of frozen fish and meat and canned and frozen fruit and vegetables. In The Phillipines, most of the food is fresh, including fruits, vegetables and seafood.

Learned to use the Imperial system of measurement is also new for them. In The Phillipines it is mostly metric (although they said soda would come measured by the ounce.) Temperature where they come from is in Celsius, while in the United States we use Fahrenheit. So when the thermometer here says 32 degrees F, they translate that to 0 degrees Celsius, a temperature they never felt at home. They said in The Phillipines they measure their height in feet and inches, but their weight in kilos.

They are very interested in currency, as U.S. currency seems a little more complicated than their peso/piso system. A peso is 100 centavos. They said coinage is 1 peso and 20 peso pieces. Paper money starts at a 20 peso note, and the largest is a 1000 peso note. The exchange rate is currently $1 US to about 50 Filipino pesos. That makes things seem very expensive in the United States. But April and Aiko said they are trying not to do the exchange rates in their head when they are looking to purchase something.

“We earn dollars, so we spend dollars,” Aiko said.

“Our dream is also our family’s dream,” Aiko said.

They have been approved for 3 years on their H1B visas, and the law allows them to be extended for another 3 years at the end of the 3-year term if they desire.

Outside of work April enjoys the outdoors – swimming, free diving and spending time on the beach. Aiko is more the indoor type – she enjoys music, movies and cooking. She doesn’t swim (but April is encouraging her to learn.)

Both are excited to learn about their new home, and are happy to be part of the team at JCH&L. 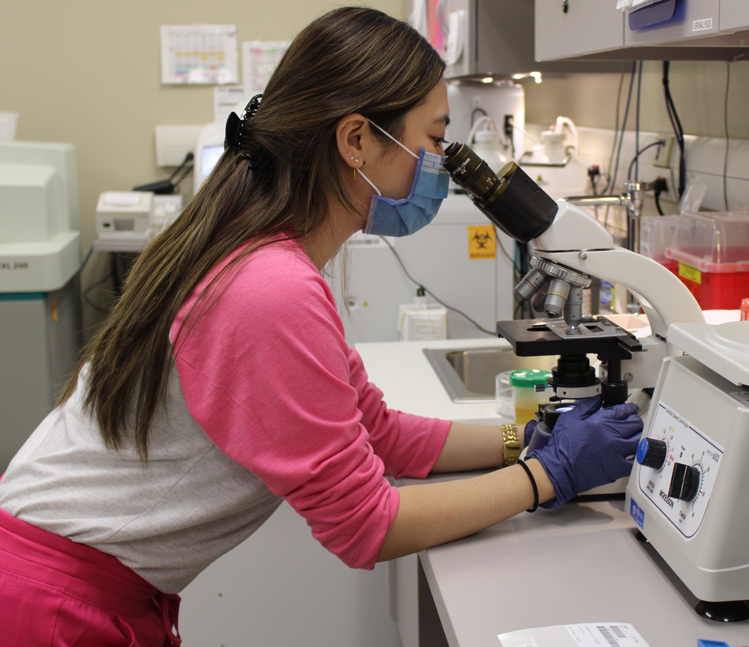 Aiko at work in the JCH&L laboratory

April at work in the JCH&L laboratory.